It was mid-morning under grey skies somewhere between Dallas and Waco, on our way to the Poage Legislative Library at Baylor University. Randy Benson, a filmmaker and professor of documentary studies at Duke, walked alongside me. We trailed two figures walking and talking beside each other: John Judge and Robert Groden.

“This is like being a hockey fan,” Randy said, “And we’re hanging out with Mario Lemieux and Wayne Gretzky.”

We all walked into Starbucks and grabbed a table.

I had met all three men during a trip to Dallas in November for the Coalition on Political Assassinations conference. I had decided to go after encountering an article by John Judge called “The Black Hole of Guyana” in a book called Secret and Suppressed. It impressed me because – in the first place – the information was incredible. It told a story of the Jim Jones cult suicides utterly at odds with what was conventionally known. No Kool-Aid to be found here. Secondly, however, was the thoroughness of the documentation Judge had used. It was scholarly. It used Guyanese sources rather than standard Western sources, which told a far different tale. There were no suicides at Guyana. The autopsist, Dr. Mootoo, had ruled all of the dead to have been murdered.

I had become interested in so-called “conspiracy literature,” which was fascinating but often ill-documented. All too often large claims were based on singular testimony or dubious provenance, so that they didn’t always pass rational muster. I was struck by the emphasis on detail and care that went into the article’s sourcing. Not long after hearing about the COPA conference and seeing that it was up the road from me in Dallas, I decided I had to meet him.

That first conference I arrived early – about 10 AM – at the Hotel Lawrence, a rickety building with two elevators, one frequently inoperative, but conveniently close to Dealey Plaza. I went up to the 2nd floor breakfast room and saw John sitting at one of the tables, going through some papers and having his breakfast. I walked over, tentatively.

He agreed and three hours later we parted company and said we would talk later, after the night’s speakers. I remember going outside in a bitter wind, barely feeling it because my mind had been blown in so many directions. I had received my first taste of the John Judge experience.

Talking to John could often be like drinking from a firehose. (WAIT, what did he just say?? And then what?? And wait a minute – what?!?) He flowed from one astonishing fact to another so fast that you couldn’t keep up. He had become a researcher via his own mentors, Mae Brussell and Penn Jones, and adopted some of that style for his own.

I’d get better keeping up, with practice.

Through John at the conferences I met Robert Groden. Groden was a legend – the man who brought the Zapruder film to popular consciousness along with Dick Gregory on the Geraldo Rivera program, Oliver Stone’s research expert on the film JFK (and who had played several roles in the film), author of High Treason and The Search for Lee Harvey Oswald and creator of the rotoscoped version of the Zapruder film.

Which is why Randy made his remark to me. And it was true – a bit astonishing to be chatting mildly over tea and coffee in some tiny Texas town.

This would become a typical COPA experience.

I attended every COPA conference in Dallas after that, and became more and more involved with the setting up (always to John’s specifications) and helping with whatever needed help. In 2008, COPA held conferences in Los Angeles (to mark RFK’s death) and Memphis (for Dr. King), which is how I ended up complaining in solidarity with Bill Turner about our LA hotel and having the singular experience of Judge Joe Brown buying me barbecue and listening to stories about the Black Panthers and skiing in Colorado. It is hard to overestimate how amazing the conferences were, in terms of being able to sit around and pick the brains of so many high-level scholars. And it was always brilliant to find that someone you knew had written a book, like T Carter with her A Memoir of Injustice, or to find a researcher you immediately hit it off with, like Shane O’Sullivan or John Potash.

And naturally over the years John and I became friends, and he served as a mentor in many ways, helping to guide me through the thickets. My first book, Dissenting Views, was dedicated to three people: Ben Rogers, the archivist for the Poage Library, Jim DiEugenio for publishing many of my articles (including my first, “The JFK 10-Point Program”) and to John, precisely for his stewardship. I could always check my thinking with him, see if I was on the right track, and though I didn’t always agree with him I always respected his agility of mind. 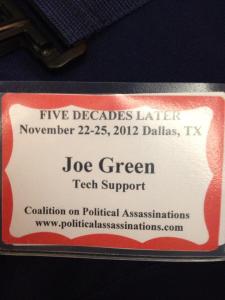 I am sitting on many years of emails, on a huge variety of topics political, philosophical, and personal, and what shines through in them is his warmth of feeling, his humanity, and his wicked sense of humor. On the phone, I became accustomed to hearing his standard greeting for me: “How are ya, Doc?” or sometimes a booming “Doctor Green, the younger!” (My father is a professor and I grew up around academia, and John always granted me an honorary Ph.D.) And then we’d be off and running about one topic or another. A few years ago, John met a girl. On an internet dating site. And suddenly our conversations changed, and I found myself listening to him wax poetic about a certain Marilyn he’d met and how he wanted me to meet her. The idea is a bit astonishing – looking for a date on a website and finding John Judge. But that was John; human, after all, not a walking encyclopedia, a real live person. And he was a happier man for that.

Running a conference isn’t for the weak. He got a lot of shit. There were idiots in the 9/11 Truther movement who disrupted COPA events and sent nasty emails because John didn’t think the Towers had been destroyed by controlled demolition. They didn’t know that John had worked closely with victims’ families or bothered to understand why he thought the way he did. As always in our thing, there were people who thought he was a CIA agent or FBI informant. I used to tell him, “If you’re working for the CIA, you need to renegotiate your contract, because they need to get you some checks.” We laughed those off, mostly. But putting yourself forward always is a risk, and one he accepted with aplomb (most of the time) and bitchiness (some of the time). He tried to ignore most of the “skunks,” as he put it, but sometimes he couldn’t, as when certain members of COPA perpetually tried to tie their personal events under the COPA banner without telling him, or tried to recruit every nutter in Christendom into the fold. Those are the things that made him angriest, and he often sent me long, blazing emails about such betrayals.

However, the times that will stay with me forever are the human ones. Eating dinner with him in Memphis and listening to a story about an out of body experience from his days in Ohio. The one conference speech he gave in ‘09 where he described how dolphins will sacrifice for one another when they know death is imminent for some or all of the group. Getting a call to go up to his room so I could help fix his tie or get his shoes on when he was injured. The late nights with the other techies (Randy, John Geraghty, Tim Plainfeather, and others who came and went) making sure microphones were ready and cameras in place. The one time John yelled at me (because another “tech” person, C—, had screwed up the audio on movie night) and after I fixed the problem couldn’t help thinking “I just got yelled at by John Judge,” and how cool that was. And how we then skipped the movies and went to an all-night restaurant.

The conferences were always 24-7 affairs, and I used to get 3 or 4 hours of sleep per night with everything that needed to be done. This led to a certain level of punch-drunkenness by the time Sunday rolled around, but it was worth it. It was a good exercise for the brain to have amazing information given to you during the day with so many brilliant speakers, and then work most of the night getting everything ready for the next day.

There have been two conferences in the United States that have been traditional rivals in the JFK community: COPA and Lancer. Many people thought that there were mere differences in opinion between the two, or that it was based on personality disputes. It wasn’t. Those close to the situation know what I mean, but I will say that I never regretted my choice of which entity to support, even when COPA was on a shoestring and Lancer appeared to have money coming out of its ears.

Randy and I have since become good friends, and indeed I’ve made many good friends over the years as a result of John and the conferences. We’re both involved in the making of documentaries about the Kennedy case; his, The Searchers, is a brilliant celebration of the original Warren Commission critics. The one I am involved with is still in post-production but features many things, including the last recorded interview with John, which I conducted. It will hopefully be out before the end of the year, but as anyone will tell you it isn’t easy these days.

My hope is that both these films will help preserve the memory of John and the causes he stood for, which were much larger than simply JFK. He was an incredible scholar, a wide-ranging activist whose absence is felt in veteran counseling and in DC schools, a dedicated servant to advocates for change like Cynthia McKinney and Dennis Kucinich, and a larger than life figure on the research scene. But for me, mostly he was my friend who I admired. I will miss him, his intelligence, tenacity, and sometimes hilarious-if-dark quips. His goal of creating a Museum of Hidden History is a perfect summation of his ideals. He was on a mission to better ourselves, to see and acknowledge the darkness within us, and to try and pull it into the light.

Donations can be made to a gofundme site or to the Museum of Hidden History at PO Box 772, Washington DC 20044.